Monica and her family attended a Pilgrimage of Mercy on Saturday, October 8, 2016. It was organized by the Cleveland Diocese and the Faith & Light group, which is part of L’Arche and open to people with disabilities and their … END_OF_DOCUMENT_TOKEN_TO_BE_REPLACED

No dust can settle on this girl!

Gather laundry from hampers in the bedrooms. Take to laundry room and start a load. Whites first. 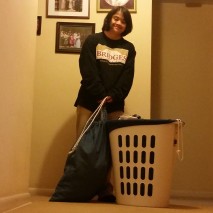 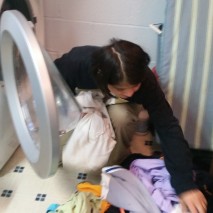 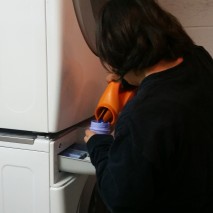 Take the city-issued garbage and recycling bins to the curb. 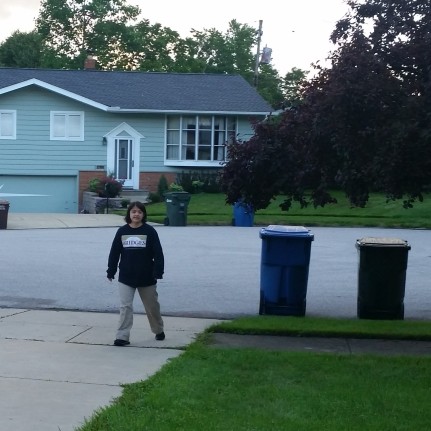 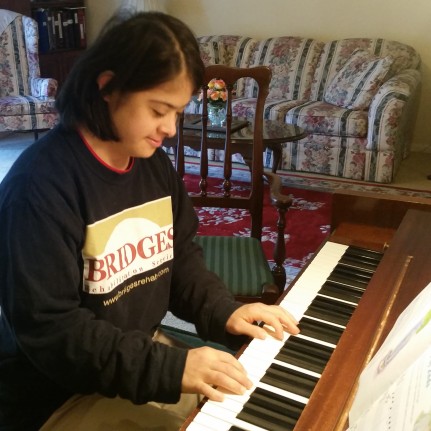 While watching for your ride, practice Italian lessons with Duolingo on the iPad. 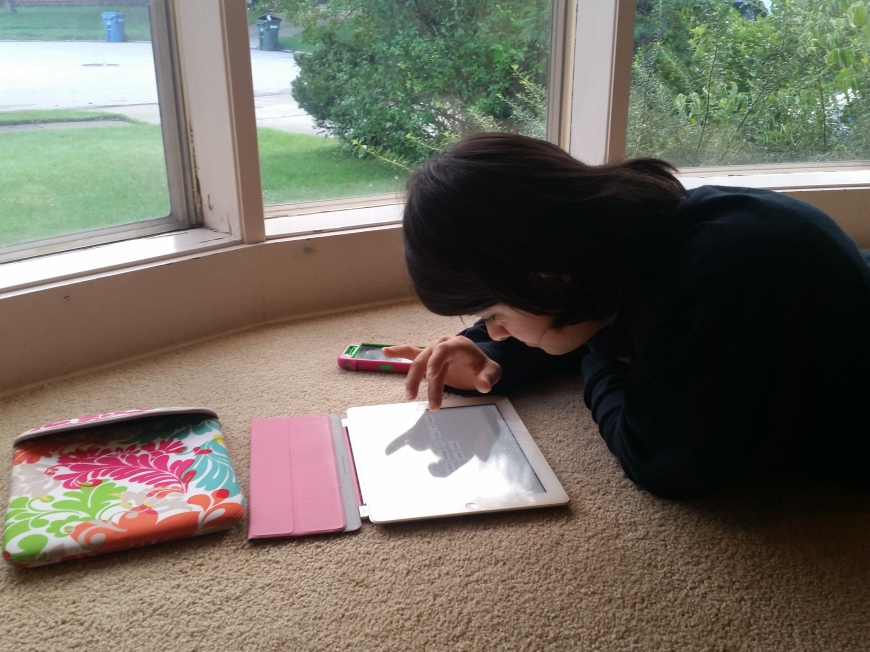 When van comes, head out the door. Greetings to work friends! Off to work.

Last fall, Monica went along with her Daddy for some physical therapy appointments after a back injury. She charmed the receptionist and all the therapists, as usual. She also paid close attention to the instructions and gave her Dad reminders about the exercises he should be doing. He was quickly cured.

So I realized her pains weren’t really going away and I guess I should do something. So when I called the Physical Therapy place, the receptionist said ‘oh yes, I was expecting your call. Monica called in and talked to one of the therapists.”

I gasped, “Did she make an appointment?”

Jan answered, “she tried, but we knew someone would have to bring her in, so I told her to have you call me.”

That night at dinner, we asked Monica about her call to the Physical Therapy place. She said she called them during her lunch break at work. So, we asked her how she got the phone number. And she replied, like anyone else, “I googled it!”

We knew nothing about Down syndrome when Monica was born. We trusted that if God sent us this baby, He would also help us figure out what to do. Over the years we have received questions and comments about her development. Sometimes we would get overwhelmed realizing there was so much we didn’t know, other times we just dug in and found answers.

One thing people told us was that Monica would plateau – that kids with Down syndrome stop learning after a while. Some people even told us this would happen by the time she was around 10 and she would always be a child. We knew this simply could not be true, but we had no idea how to respond to such things. Now we have the personal experience that shows a person with Down syndrome does not plateau unless they receive no input, just like anyone else. Of course, Monica, like everyone else, is learning every day. We think perhaps the notion has been perpetuated because people stopped teaching, stopped pushing. Just a generation ago, special education programs were completely different and children with Down syndrome weren’t even taught to read. We are so grateful for the help we have received from the county and the school system and the therapists involved in Monica’s life.

Monica has however, learned some things in a different way or in a different order than the developmental checklist at the pediatrician’s office. And some things, particularly abstract ideas, are very hard for her to understand. But she’s not giving up and neither are we. In other posts, we talk about her starting piano lessons at age 18 and she continues to learn new things.

Ever since she was a very little girl Monica has been singing. But for many years her singing was more like open-mouthed humming. She had the tunes but not the words. We would often encourage or correct her to say the words, but we were not too successful. We would hear songs from Sesame Street, songs from church, even the Star-Spangled Banner – but never with words.

At Monica’s IEP meeting in first grade, we talked about reading. Since her development in all areas was slower than the other kids, we hadn’t really been expecting her to be reading yet and we felt we were plugging away towards reading. When the teachers told us they were beginning a sight word program with her, we were initially shocked. We said, “You can’t give up on her… we want her to be able to really read!” Then her special education teacher explained that they weren’t giving up either, but that just like the Signing had been a bridge to speaking, sight words would be a bridge to reading. Our other kids had done sight words too, but along with phonics and decoding, it all went so fast that once they were reading we never gave much thought to sight words. We did know that Monica certainly ‘read’ the golden arches of McDonald’s and that the red Giant Eagle logo meant grocery store to her. The Edmark Sight Word program is a very structured system which her teacher followed rigorously. Monica soaked it in and loved it. She was remarkable in her retention. We soon saw results that amazed us.

She came out of Vacation Bible School the first day bursting with joy. She held a paper with the lyrics to “This Little Light of Mine”. She had been singing that song for years, but never with words. She showed us the paper and said, “Look – it has words!” She began to sing the song with its words. She had learned all those words in her Sight Word program. She was so happy with this new discovery!

The Ear-Nose-Throat doctor was a regular visit for us. We always followed up on suspected ear infections, had ear wax cleaned out, had rounds of antibiotics, even preventatively, had ear tube surgery, and on and on. But there must have still been blocks of time in which the fluid in Monica’s hearing system just kept her from hearing well. Maybe there was also something about the combination of voices and instruments that made it hard for her to hear the words of songs. Now that she could read the words…she could sing the songs!

We soon realized this could be applied further. She always cooperated with bedtime prayers, but never actually said the words to the prayers, she just mumbled along. So we gave her printed prayers. She was so happy to read her prayers! And it wasn’t just reciting words: in the Edmark program, she learned the meaning of the words too and it shed light on so much for her! When you listen to the spoken word, you can’t control the speed it comes at you. When you read, you can control it. You can go the pace you need for understanding. This concept had never occurred to us for ourselves or for our other kids, because it came so smoothly for us. Monica’s knowledge of the words from her sight word program gave her the motivation to decode the words she did not know, because she now realized the point. Her life was enriched by this revelation.

Talking on the phone to grandparents in another state is fun for most kids, but it had always been frustrating for Monica and her grandparents. They had such a hard time understanding each other due to Monica’s difficulty in hearing well and speaking clearly. When Grandpa started writing letters to Monica, she was thrilled! She worked harder than ever in her writing so that she could answer Grandpa. Their relationship blossomed and she would carry his letters around and re-read them.

Areas of speech that are particularly hard for Monica, like putting the s on plurals or possessives, were helped by reading, because she had not really ‘heard’ those s’s consistently. Seeing them in print and learning the difference of the word’s meaning with and without the s through a structured lesson gave her what she did not absorb through hearing them in daily use.

In many areas of Monica’s development, we have been grateful for the professionals in her life who expose us to new ideas like the Edmark program. We have been surprised by Monica’s progress that didn’t follow the same path as other kids but took us on one wonderful adventure after another. 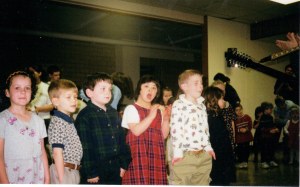 An excerpt from the Christmas Letter 2004

Monica still loves school (5th grade) and her reading is really coming along.

There have been many other events and trips this year but some of our fondest memories are family visits and seasonal gatherings with friends and family.

Two of our best weekly routines are getting together Saturday morning to ‘white board’ the weekend and the upcoming week (plan it out on a whiteboard) so everyone gets everything done without conflicts, and being together on Sunday for an hour of spiritual reading. Spiritual reading is something we started about a year ago and we take turns reading a page or so each… out of the ‘current book’. These are books that explain the faith or the virtues clearly or a biography of an inspiring person. Monica and John listen or quietly look at their own books.

An excerpt from the Christmas Letter 2003

Monica is being pressed in school. We are delighted. She has teachers that have high expectations of her! Her diction slowly improves; her reading and writing progress more rapidly. But best of all, she is warmly and sincerely liked by all of her teachers and fellow students. She is an ambassador with a thumbs-up and a ‘Good job!’ and a pat on the back available to anyone whose slightest good action catches her attention. Greg is also a serious student and is doing well at piano. John got a guitar for his birthday and also plays an imaginary violin. He breaks into song all of the time!